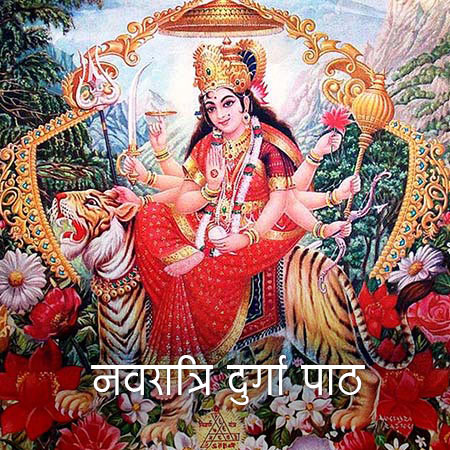 Navratri Durga Path characterizes the devotion/puja of maa Durga and her 9 avtars. Durga puja is meted out throughout navratri every year. Though there are four types of navratri; chaitra navratri and shardiya navratri hold huge importance for hindi spiritual celebrations. In all the 9 days, the primary 3 days are devoted to maa Durga, consequent 3 to deity laxmi and also the last 3 are dedicated to divinity saraswati.

Ma Durga is that the type of maa Adhya Sakti who represents the life and also the existence of the globe. she is revered as the supreme energy that’s inherent in everything around. Immortal Hindu deity herself represents the Maha Sakti as she is that the integration of supreme goddesses – Lakshmi, Saraswati and Maha kaali.
her name –durga, means that ‘ ‘the invincible’

Ma Durga is additionally idolised as an emblem of victory over evil. Vedas describe her as a determined deity riding a lion with all types of weapons in every of her 8 hands. The weapons signify the aim she was created for, to hit Mahisasura. every of the weaposns in her eight hands depict the ability to destroy evil in all the directions.

Benefits of Organizing a Durga Puja: